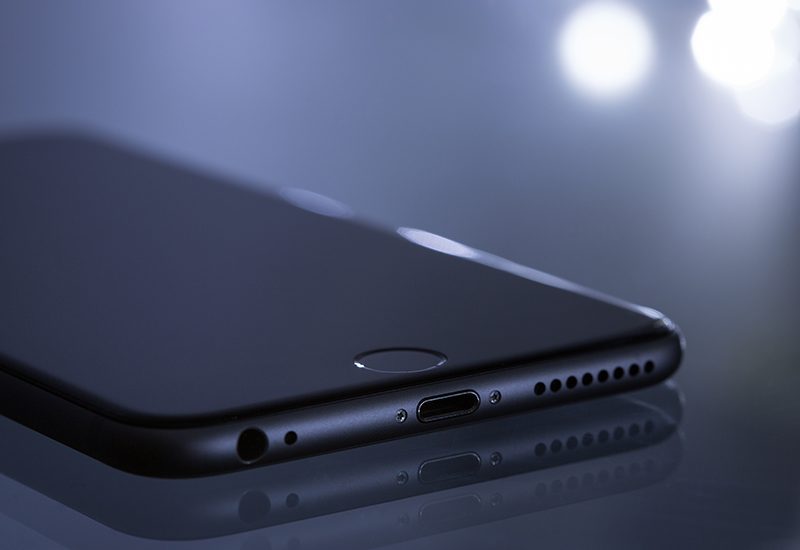 Thinking of Repairing Your Own Phone? We’ll Help You Decide.

I remember how happy I was when I purchased my iPhone 6 Plus back in the Fall of 2014.  Everyone was asking me how I could possibly lug this mini-tablet of a phone around with me, but all I could think of was the additional screen space that would enhance my ability to take care of office work on the road.  The phone did everything I was hoping for and then some. I told the doubters that having an oversized phone was like trying high-speed Internet. Once you’ve had the experience, you could never go back to dial-up.

Big phones are awkward, and I drop my phone a lot.  Getting out of the car after my phone had unknowingly slipped out of my pocket was a big one. The phone didn’t fall far though, and my case always protected it from any damage. The first fall that caused actual damage was around Thanksgiving in 2015. I was playing a game in the backyard with my boys on our stone patio, and the phone was tucked into my front hoodie pocket, the one big enough to slip both your hands into at the front. I was jumping up and down madly swatting at a ball, and at one point the phone flew out. Everyone has had this moment. Time kind of slows down, including the “NOOOOOOO…” that escaped my lips as I realized there was no way I was going to be able to catch it before it hit the cement. My case at the time was one of those executive book style cases, and it had flipped open, acting as kind of a parachute that would ensure that the phone would certainly hit the ground screen first. I picked it up, as I had so many times in the past, hoping that I had eluded damage yet again. The bottom half of the screen had about 4 or 5 long cracks in it and affected only the very bottom of the viewable portion of the screen. After finding out that a repair would be around $160, I decided I would live with the cracks, and after a while I stopped noticing them all together.

Two years and several falls later (and about two weeks ago from the posting of this entry), with no additional damage to speak of, I was gardening with my wife when I received a text. I was wearing gardening gloves, but reached into my jeans pocket to pull out my phone. Because the phone was so big, it was one of those tight fits that made me have to pull with some effort to wiggle the phone out.  The problem was that the gardening gloves were fabric and didn’t give me much grip. So of course, I managed to pull the phone just out of my pocket when the gloves lost their purchase, causing the phone to fall.  Once again the phone case flipped open, causing the phone to hit my driveway screen first.  The phone didn’t fall far so I figured I was good. This made my horror all the worse when I picked up the phone to find the screen looking like the one on the left in the photo below (that is the screen I had). 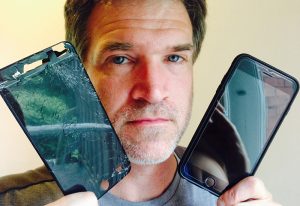 Using Your Phone With a Completely Shattered Screen

How bad could it be, right? Well, I can say without reservation it was pretty bad. Glass was falling off the phone as I was using it, and I was getting worried the glass might end up cutting me, or fall into my keyboard, or on to the floor at home, which would not be a very kind surprise for my dog. Only about 60% of the screen was useable, which made even texting a challenge. I couldn’t see the send or delete buttons, even when I tried rotating the screen around, meaning I was stabbing fields of broken micro glass where I thought the buttons should be. It got so bad I wanted to throw the phone across the room, which I figured wouldn’t have been that bad given it was already a disaster anyway. (I managed to refrain from doing so).

Should I Repair My Phone or Buy a New One?

I phoned around to a few repair shops, with the goal to both fix the screen and replace the battery since that was becoming a challenge as well.  Even with Apple’s $35 battery subsidy, I was being quoted anywhere from $180 to $230 for the repairs.  I did some research online, on eBay, and Kijiji, and discovered I’d be paying around $350-$400 for a used iPhone 6 Plus. I decided to move ahead with the repair given the cost was only a little more than half of the replacement.

Making the Decision to Repair Myself

I had decided on the repair store that wanted $180 for the repair and battery replacement, but I was curious to find out the costs of the individual components.  I did some Amazon research, and found that I could buy the screen/digitizer (the digitizer is what converts your finger taps in to digital signals for the phone), the battery, and all of the tools required for around $70, including tax. This was less than half of the repair cost! Now some background about me and my decision to repair the phone myself. I am the owner of Bailey Creative, an Information Technology firm and consider myself a digital native. I’ve built computers from scratch as well as torn apart and rebuilt laptops. Despite all of this, I would suggest that if you generally consider yourself ‘handy’ and don’t get frustrated easily, then doing your own repair would be something I would recommend.

Preparing to Repair My Phone Myself

If you have never repaired a phone on your own, I would set aside about 2-3 hours to do so.  Prepare a nice large and clean surface— I used my dining room table.  Bright lights are a must. If you require them, glasses are an absolute must as well. In fact, I finally gave in and purchased reading glasses, just for this repair. I also purchased a magnifying stand, but found I didn’t need it. I set up my iPad so that I could watch a YouTube repair video while I worked. Also, make sure you have a blow dryer handy.

Tips I Wish I Had Known Before the Phone Repair

Taking the phone apart for a second time to repeat the earpiece speaker step only took me a few minutes. Like many repairs, doing the first repair provides you with enough knowledge to make the second much faster.

The only other thing I will mention is this: if you use Touch ID, be aware that it may not work properly once you put your phone back together. Some third-party screens do not work properly with touch ID, which was the case in my repair. I don’t use touch ID so it wasn’t an issue for me, but if that is an important feature for you please check with your replacement screen manufacturer before ordering the part.

Like all computer repairs that do not require soldering, I came to the same conclusion after repairing my phone: The greatest asset involved in doing the repair is simply the courage to do so. Thanks for reading, and best of luck in your repair!

10 Digital Marketing Tips for the Holidays